The Black Ice printer drivers have the most extensive feature set and user interface on the market to satisfy a wide range of requirements. Many of the features are exotic and most users may not need some features such as watermarks, annotations and different TIFF file options.

The Black Ice Printer Drivers include several methods of restricting access to specific controls and functionality as desired by the user. These methods include: 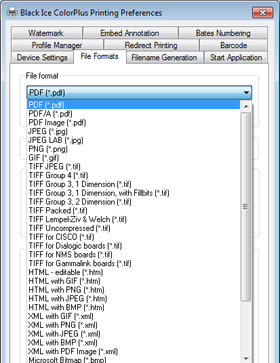 Fewer tabs and only certain file formats are available