There is an option in the Black Ice Printer Driver to generate the output file in memory “Generate output in memory”. 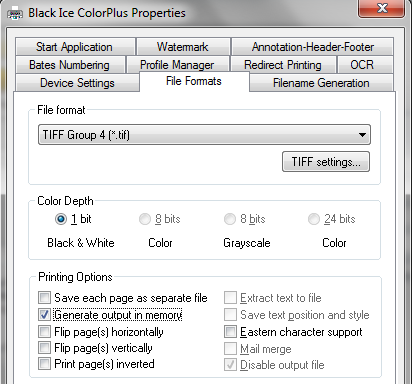 In order to demonstrate how use messaging interface to capture a printed document in memory, the API/ RTK (Resource Toolkit) includes the Print to Memory Samples. All of the Black Ice Printer Drivers include a messaging interface. The printer drivers communicate with applications through this interface by sending messages at different stages of the printing process. The applications capture the messages sent by the printer driver and process them.

The printer driver will send messages when the following events happen during the printing process:

Source code for the Print to Memory Samples is available in C++,C#, and VB.NET. Using the Start Application feature of the Black Ice printer drivers along with the messaging interface provides a straightforward method of monitoring the printing process.

Back to Sample Comparison Chart page